Ever since I first read about the floating offensive index for the Master Football Game in the APBA Journal so many years back, I was excited about the possibility of finally having a system which emphasized the importance of every point in Offensive and Defensive Team totals. It always bothered me that a +7 Offense would be exclusively in “B” Index while a -7 Offense would also always be in “B” Index, yet it was clear which was the better of the two teams on the tabletop. 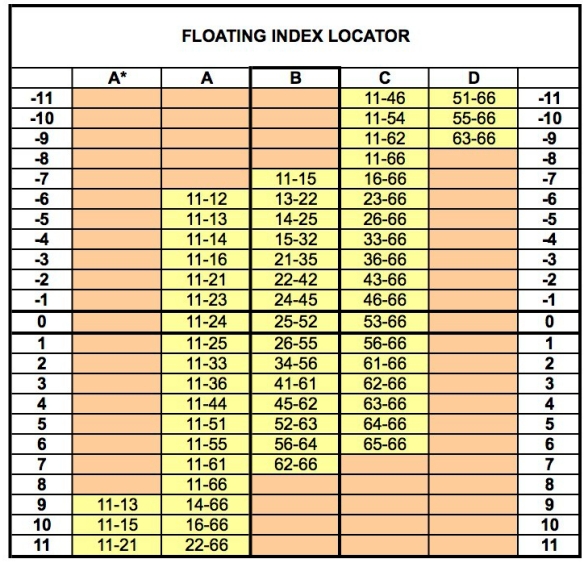 problem but the emphasis was more on normalizing differentials of +/- 7. Outside of that range the system became extremely generous/punitive, introducing the concept of A* or D indexes (In A* all pass plays regardless of receiver grades were in A and +1 yard was added to all running plays. In D, all pass plays were in C regardless of receiver grade an -1 was subtracted to all running plays). These additional indexes kicked in at +/9. My APBA Brother and gracious host of this site, Greg “OGuard62” Barath, experienced first-hand how extreme the above table was during his 1985 NFL Replay. The Bears regularly had teams in “D” index making it near impossible for a team like the 85 Buccaneers to gain a yard let alone score a point (while many Bears fans would argue this was realistic, the Bucs actually put up 307 and 373 yards of offense on the real-life “Monsters of the Midway”). Greg and I consulted after week 2 of that replay and both decided that perhaps the system which came with APBA’s Master Game was a better choice.

Both Greg and I have used APBA Finder system below in all our replays since: 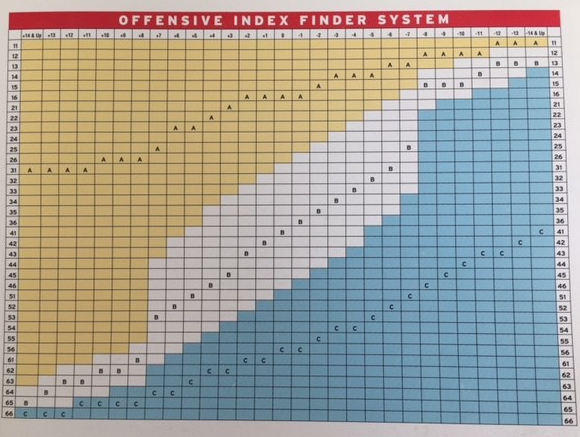 APBA’s system eliminated the concept of A* and D indexes (which disappointed me) but was certainly more realistic for differentials outside the +/- 7 range. APBA, while gradual within the  +/-7 range, made the drop from +/- 7 to +/-8 more extreme. I believe this was done to stay true to the game engines index rules, but is there really that much of a difference in a team at -7 or a team at -8? In my view, no, every point should make a difference and the decline should be more gradual. So I set out to create my own version of the Offensive Index Finder System.

The fruit of my efforts is below:

As you can see from the “Yellow” B Index section the jumps between all point totals is just about the same. Teams in +/- 8 will still be largely playing in  A or C Index but a team at +/-6 or +/-7 will as well. I also re-introduced the A* and D indexes but at a much higher point differential. Instead of +/- 9 it kicks in at +/- 16 (rules are the same as those from the AJ). For me this satisfies my need to have every index point count truly distinguishing the +47 offense from the +40 offense. If interested in using this system I have included the link below. The file is in Excel.