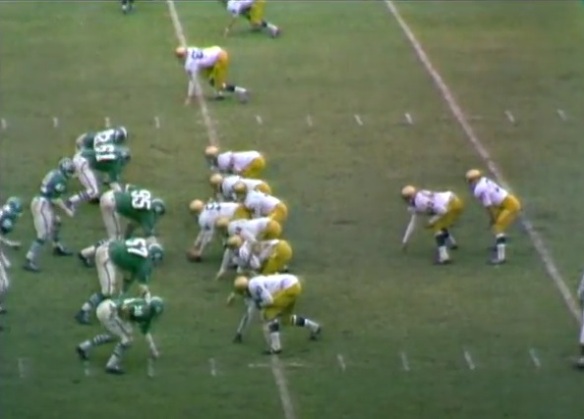 Notre Dame Offense: The Fighting Irish are in 21 personnel (2 running backs/1 tight end) and the formation is called “Pro Slot Left” or “Slot Left”. Quick tidbit, the “I” backfield alignment is the default setting for the Pro formation, this is the reason this formation is not called “Pro I Slot Left”. In APBA Football, the base formation is “Pro Set” which indicates two wide receivers are aligned on opposite sides of the field and the running backs are in a split alignment positioned 5-yards behind the offensive guards.  Notre Dame primarily used this formation on neutral downs and either ran off tackle, counter treys or fullback dives. When they passed on early downs, it was primarily play action type passes or roll outs (sprint-option type).

A unique rule for the nose tackle on passing downs in this defense is to not attack the line of scrimmage but two-gap the center. This means he wants to get his hands on the center’s breast plate and have his head to a side to be able to look into the backfield and shed the block to either side to defend the run (primarily the draw play).