I’m contemplating replaying the 1993 season after my next project (1968 AFL/NFL) is completed. I’ve had this set for several years now and wanted to break it out for a test run. So I created locators for each team, determined “Yards per Catch” and “Fumble Frequency Number ratings” for each team. The cards played as well as I remember them but there are a few factors that cause me hesitation. I miss having access to all the players’ cards who “touched the ball”, the kicker’s cards don’t have the additional dice rolls (37 thru 42) and the “P” column for kickoffs wasn’t invented yet, and players weren’t coded for fumble recoveries yet. Of course, I could use Howard’s Ahlskog chart for on-side kicks to mitigate that deficiency and implement other workarounds. The preparation phase of a replay is so tedious and time-consuming that I must be 100 percent certain prior to embarking on this project. So I will be welcoming feedback on this matter.

With that said, let me take you back to East Rutherford, New Jersey for opening day of the 1993 campaign. The Denver Broncos came to town to take on the retooled New York Jets. This was the first season of free agency, although the Jets struck out on Reggie White, they did land Boomer Esiason, Ronnie Lott and Leonard Marshall. I remember wiping a tear from my eye watching Dennis Byrd walk out on the field during the pre-game ceremony. 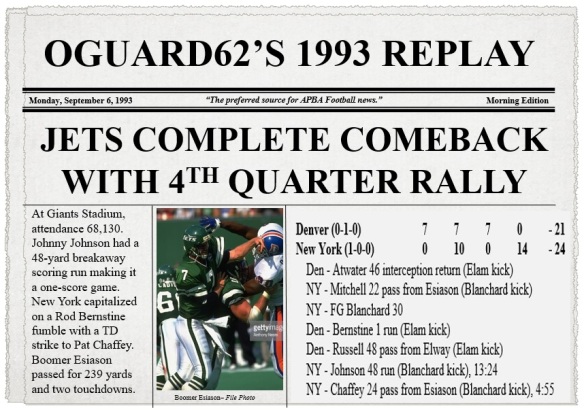