The Detroit Lions’ improbable “Cinderella” run came to an end at the hands of Jimmy Garoppolo and the San Francisco 49ers 48-20.  But, for a while, the Lions hung in there!  Late in the first half, Detroit kicker Matt Prated nailed a 47 yard field goal to cut San Fran’s lead to only 21-17.

But, after that, it was all Niners . . . . as they scored four more touchdowns and held the Lions to one field goal the rest of the way.

Garoppolo had a very good game, hitting on 22 passes to nine different receivers for 265 yards and four TD’s.  George Kittle hauled in two of those scoring passes, and running-back Tevin Coleman added 2 on the ground as San Francisco completed their rout.

The 49ers will now host the Philadelphia Eagles in an NFC semi-final contest.

Meeting for the second time in these playoffs, the Buffalo Bills relied on their stellar defense and the remarkable rushing ability of their quarterback, Josh Allen, to upset the favored Houston Texans 13-3 to advance to the next round of the playoffs.

Allen only had a so-so game through the air, but he scrambled for 99 yards on only 11 carries, including a 34 yard run for the game’s lone TD in the third period!  But it may have been his 4th quarter scramble that was the big difference maker for the Bills.  On a 3rd and 15 he scrambled for 17 yards for an important first down that kept their drive alive, eventually setting up Stephen Hauschka’s 44 yard field goal with only 1:40 left – that made it a two score game and, effectively, won the game for Buffalo.

The Bills’ offensive line was terrific all game long – as Buffalo averaged 7 yards per carry in tallying 268 yard rushing!  Next up for the Bills?  The winner of the Chargers-Ravens game.

With 10:30 to play in quarter #1, the Eagles took the lead on a Miles Sanders TD run, but missed the extra point.  They lost the lead later in the quarter when Minnesota’s Dalvin Cook scored on a short run, followed by a successful PAT.  And, Philadelphia did not retake the lead until only 3:00 remained in the game in a very close four point victory on the road over the Vikings.

And, it was interesting how they did it.  Down by only 3 points late in the 4th quarter, the Eagles decided on a taboo strategy – they took a successful game-tying field goal off the board to take advantage of a taunting penalty on Minnesota to move the ball to a first and goal at the Vikings’ 10 yard line.  Two plays later Carson Wentz found Sanders alone in the end zone for the game-winning score.

Sanders had a terrific game, rushing for 139 yards on 17 carries, and he scored three TD’s in the victory.  Philly now awaits the winner of the Lions-49ers game.

I know it doesn’t look like it, but the Browns actually hung around in this game until the fourth quarter.  After three periods, Kansas City led only 17-10, but it was then that Patrick Mahomes of the Chiefs decided to get serious, throwing three TD’s in what turned out to be a rout!

Cleveland really shot themselves in the foot the whole game.  Quarterback Baker Mayfield completed nearly as many passes to Kansas City (7 interceptions) as he did to his own teammates (12 completions).  And, his most costly pick happened in the second quarter when Tyrann Mathieu intercepted a pass intended for Odell Beckham in the Chiefs’ end zone.

Mahomes, who was injured on Kansas City’s very first series, still had a phenomenal game, hitting on 27 completions to ten different receivers for 462 yards and 5 touchdowns.  In fact, the Chiefs accumulated a remarkable 600 yards of offense in this game!

Nick Chubb, Cleveland’s talented running-back had a fantastic game in defeat, rushing for 193 yards on only 18 carries, including a 41 yard run on his very first touch and a 54 yard TD scamper late in the first half.

KC will now host Tom Brady and the New England Patriots in an AFC semi-final game. 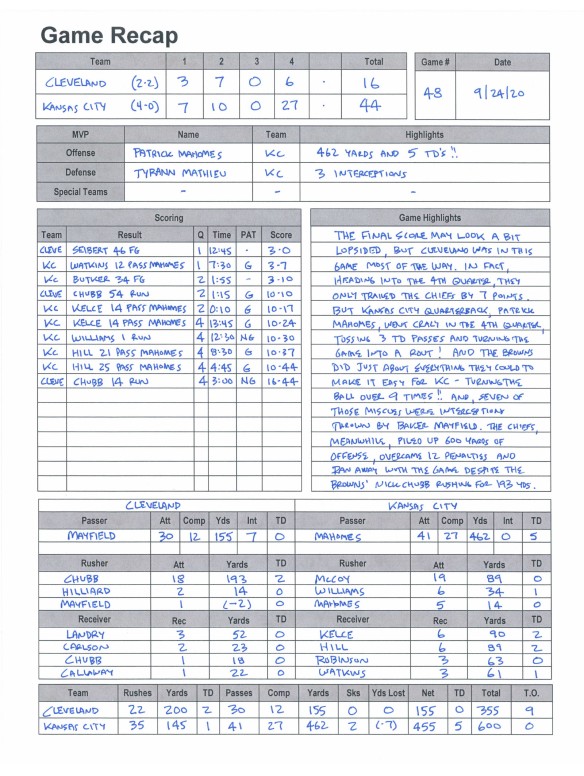 The favored Green Bay Packers hosted the Dallas Cowboys at the stadium where these two teams have played some very memorable games in the past . . . but, this time it was the Cowboys who came out on top 37-17 to bounce the Packers from the tournament.

Green Bay actually ran 20 more plays than Dallas, but a combination of great field position for the Cowboys and Packer quarterback, Aaron Rodgers being sacked 7 times, was the difference in the contest.

Dak Prescott and Ezekiel Elliott both had sold games in the victory – Prescott with 21 completions for 247 yards and a pair of TD’s, and Elliott rushed for 89 yards on 17 carries and also scored twice.

The Cowboys now travel to New Orleans for a rematch with the Saints. 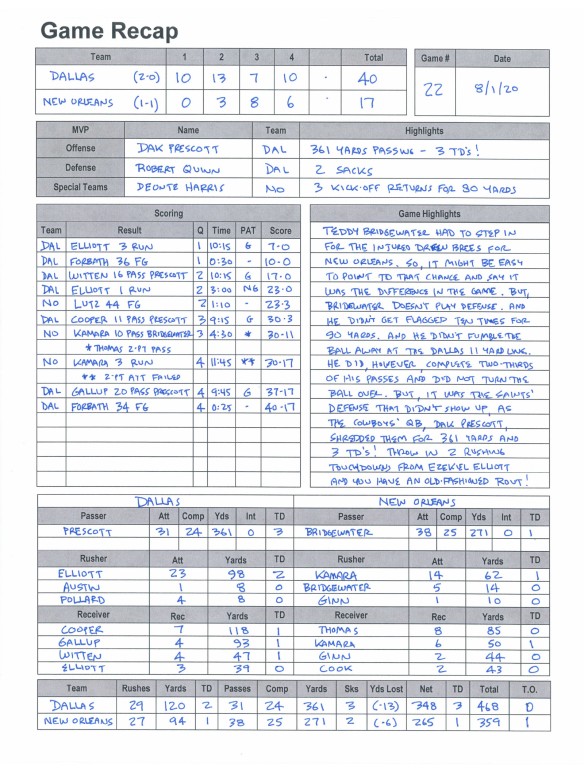 The New England Patriots rolled to an 15-point victory over Indianapolis to advance to the next round of these playoffs and to eliminate the Colts.  Pats’ quarterback Tom Brady did what Tom Brady has been doing for years – he made big plays when he needed to.

The Colts, behind ex-New England backup, Jacoby Brissett, got to within 8 points at the end of the third quarter.  But, after trading punts, the Patriots went on an 89 yard, 17 play, 9:30 drive, with Brady hitting clutch passes to Rex Burkhead of 24 yards and Julian Edelman for 45 yards before Sony Michel took it in from one yard out for his second TD of the game.

New England now waits for the winner of the Browns-Chiefs game to see who they will play in the next round. 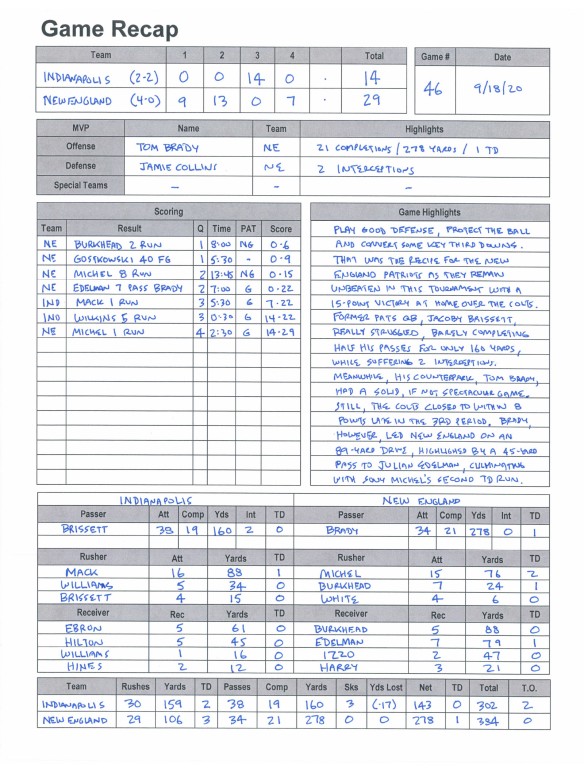 When Drew Brees is “on” he can be frightening!  And, he was just about at his best against the Rams in the first game of the “Elimination Round.”  The Saints’ All-Pro quarterback completed 33 of his 39 passes for 335 yards and a pair of TD’s as New Orleans held off a rally by Los Angeles to win by 13 and advance to the quarterfinal round of these playoffs.

He had some help.  Latavius Murray and Alvin Kamara combined for 146 yards rushing on 28 carries (5.21 yards per rush) and the Saints’ defense forced 3 Rams turnovers in the victory.

But L.A. made it close, narrowing the Saints’ lead to only 3 points early in the final period.  But Brees connected on a 53 yard pass to Jared Cook that set up an 8-yard TD toss to Michael Thomas to help New Orleans pull away.

Because injuries play such an important role in the outcome of an NFL game, I wanted to share here the list of injured players as we get ready for the next round of my playoffs.  And, as you can see, some teams are pretty much at full strength, while others are going into their contest with a number of key players on the shelf.

I have completed the “Double-Elimination” part of my 2019 NFL Post-Season Tournament.  Now, I have 16 teams left.  Four teams are 3-0 (They are the #1 and #2 seeds respectively in their conferences), and the remaining 12 teams are 2-1.  Here are the pairings as we move to a single-elimination format: