The beauty of the APBA Convention is the camaraderie, just being in the same room with so many folks who share the same passion for our hobby. I always look forward to seeing “the guys” but really enjoy when I finally get to meet someone face-to-face who I have corresponded with for years on the message boards. This year I had the pleasure of hanging out with David Taitano or as he is known on “Between the Lines” – RogueBorg1. What a class guy!!  We probably spent a total of 13-hours playing football and loved every second of it.  Dave just has one character flaw; he doesn’t know how to lose. The only solace I can take out of the “beat downs” was the outcome of each game came down to the final roll.

As someone who loves APBA Football, this past Friday’s Hall of Fame Induction ceremony had an APBA Football theme to it. Hall of Famer and renown APBA Football player, Greg Wells, brilliantly performed “Master of Ceremony” duties. He began with a tribute to recently deceased, Howard Ahlskog. Howard ran the APBA Journal during the 80s and is the preeminent “Football” guy in APBA history. Greg began with a moment of silence and then shared several personal stories of his friendship with Howard. Greg than provided a short bio and introduced, without question, the second biggest name in APBA Football history, Mr. Ray Dunlap, into the APBA Hall of Fame.  Ray was the commissioner of the Suncoast Football League for over 20 years, APBA Football writer for the Journal, creator of several innovations to include his extremely popular “Match-up System” just to mention a few of his many accomplishments.  Greg ended the evening by introducing Mr. John Herson into the Hall of Fame.  I know John’s passion for the APBA Football game and it was the perfect way to close out the ceremony.  I’m so proud and honored to be inducted with these two fine men. 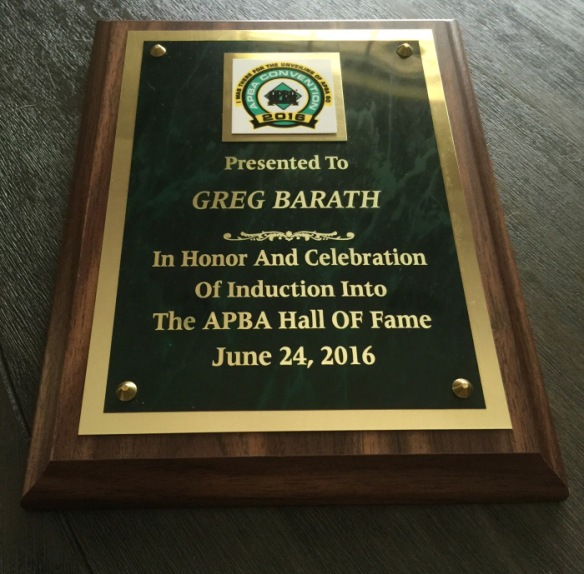